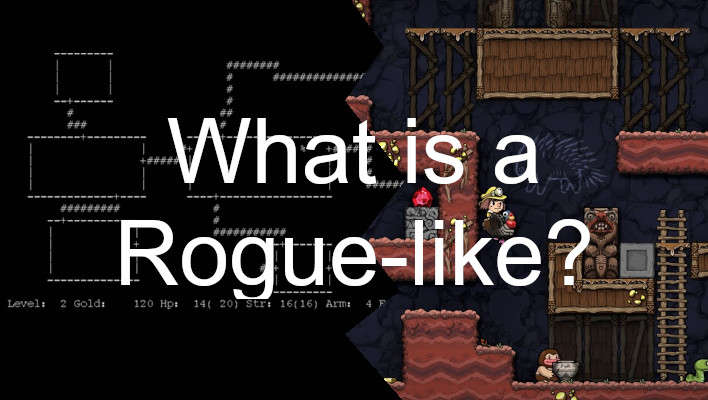 Rogue-like game or rogue-lite is a type of role-playing video game characterized by a dungeon crawler design with permanent death. The genre’s appeal comes from the intensity of the gameplay and independence of progress, meaning that once your character dies in the game world, it stays dead.

Rogue-like games will often incorporate features of likely surprise the player for him to truly be challenged. The name of the rogue-like is taken from Rogue, an old-school RPG that was one of the first known to use procedurally generated levels back in 1980.

A Rogue-like game is “generally” characterized by procedural generation of game levels, turn-based gameplay, tile-based graphics, and the permanent death of the player character, its focus on character building and permanent progress, and its twisted take on RPG.

Rogue-like games are generally though not always plotted to make the player character’s progress more difficult, often pitched against the forces of chaos that often result in the character’s death no matter how well prepared they may be. Although features vary from game to game.

Many rogue-likes contain traditional RPG elements such as statistical character development, exploration of a dungeon, interaction with NPCs, and equipment improvement. The word roguelike is a compound of “rogue” and “like”, as such it has been applied to other games that have similarities to Rogue, but the use of the term is sometimes disputed.

Level design is such a crucial part of every game, and roguelike games are no exception. It’s even more important than the level design is good because you rarely die to enemies, or lose your progress for that matter. You just get knocked back to the last checkpoint and try again.

Level Design is one of the most essential elements in any game. However, in most genres of games, level designers don’t have to think about the player experiencing things in an order different than the developer intended. In a Roguelike, where most of your UI is taken up by procedural content.

In a roguelike, where most of your screen is filled with procedural content, your level design has to be carefully crafted to create interesting spaces for all your enemies to inhabit. Level designers have to provide an experience like a structure and tells a story even though your actions can be taken in any order whatsoever.

Rogue-like level design is how you can trick your brain and players into thinking a fictional space is real. It all starts with tile selection versus random generation. Then comes the building decisions: how many separate rooms to include, what sizes should they be, and what shapes?H

rogue-like level design involves creating procedurally generated dungeons and other areas in games. Basic principles of these games, such as random generation of levels, difficulty, and permadeath, are described. The main emphasis is placed on the technical aspects of map generation and design, although some aesthetic issues are also covered.

Every element of a roguelike game is designed to create a new level every time you play, but level design in these games is a very different endeavor compared to creating levels in more traditional, linear games. In a roguelike, there are no predetermined events or progression the player follows.

So the level must be designed with this freedom in mind. It’s a 3D third-person game where you cannot directly kill the enemies. This forces the players to use their environment as well as items and weapons to survive. There is a lot of competition with other developers that make it difficult for a small team to compete.

When the entire game is randomized with each playthrough, demand completely different kinds of level design than any other game genre. Every level in a roguelike needs to be intrinsically replayable offering variation in not just where enemies are placed, but what kinds of loot they’re carrying, and how the environment responds to the player.

Roguelike-level design is a unique beast. The main goal is to provide an engaging experience to the player, but nothing else. Just like all games, you must offer the player challenges and interesting gameplay, but roguelikes gained their name from the fact that you can perish at any time and there aren’t “levels” as such.

Roguelikes are often characterized by an ASCII character interface, and the use of turn-based movement, and permanent death. Think of them as an homage to the traditional Rogue game. Roguelites, on the other hand, while sharing similar mechanics, do not have to be turn-based and allow for developers to implement their real-time mechanics while still keeping the permadeath feature.

Roguelikes are a subgenre of roguelikes, characterized mostly by level layouts being reset upon “death”. While roguelikes feature permanent death where the player must restart the game completely over from the beginning. Roguelites employ more forgiving mechanics.

This makes Roguelites closer to other action RPGs, while still retaining some roguelike aspects. The term itself comes from the name of one such game, “Roguelike”. Both usually revolve around a grid-based map and turn-based gameplay, though they can also be played as real-time action games as well as having some association with survival horror.

One of the most important characteristics of these kinds of games is permadeath, which means that once a player character dies, they cannot return to the game. Roguelites do share some elements with roguelikes, but they also have some form of permanency in terms of items or currency acquired, or lack important features of their counterpart.