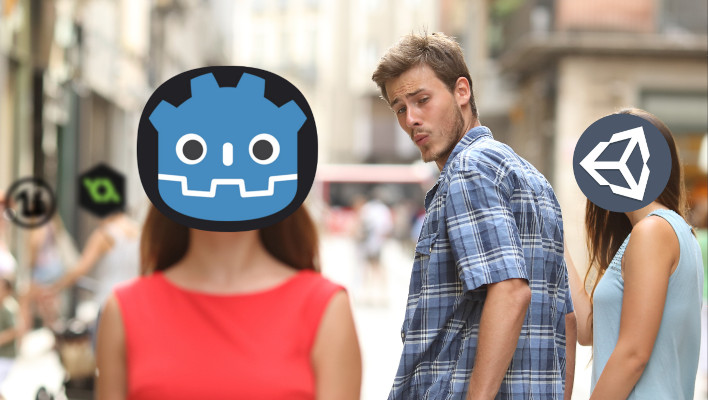 Godot is an amazing game engine with an active developer community. Whether you want to make an interactive 3d co-op or a static 2D game, Godot is a great tool for making your ideas come to life. With its powerful features and simplicity of use, it is rapidly becoming one of the most popular game engines available on the market.

Godot Engine is open source under MIT license so we can use it free of cost. Godot is completely free of cost and open source for making 2D and 3D games. The visual nature of Godot’s interface lets developers place any node in the scene and quickly set variables through a UI editor, while also helping to catch errors early.

Godot is a good engine for beginners because It has awesome user-friendly features. There are a lot of tutorials available online that teach Godot, and there are a ton of resources for new Godot users to get started. It will be fun to develop games without any coding skills using the Godot engine.

It offers compatibility with other major game engines. This allows you to transfer animations, models, and scripts between engines. This can be incredibly helpful if you’re working in a team environment, allowing people to focus on their own areas of expertise rather than having to create everything from scratch.

Godot’s power and flexibility are largely from its use of node-based scene editors, which let creators focus the bulk of their efforts on logic rather than low-level code. Developers can choose from different node types: Sprites, Actors, and PathNodes make up Godot’s 2D toolset while 3D has MeshNodes and SceneTreeNodes.

How does Godot work?

Godot has its own built-in internal scripting language, GDScript is extremely powerful yet beginner-friendly. It’s powerful enough to help you build whatever you can imagine, but it can also be easy enough for you to use to simply code the code that makes your game function correctly.

It consists of an animation machine with a GUI of animation, images, mixes, animation bushes, body shapes, and real-time scenes. Each node can have a list of child nodes, and each child inherits variables from its parent. Nodes have user interaction functions, so the developer only needs to code to update anything.

Godot offers a powerful animation system for both gameplay and cutscenes, allowing you to bring your story to life. The Scene and Game Scene managers work with Godot by managing plugins and engines. Node and Scene Tree Managers help with GUI functionality and organizing nodes in the Editor.

There are two important things that work in Godot under the hood. The scene manager and Game scene manager. This scene manager’s job is to work as a mediator between the different engines that Godot uses. The Node Manager and Scene tree manager (which is often used by GUI plugins such as the drag and drop) also do this.

The root node of the scene is called the _SceneManager_, and the SceneTree manages all of the nodes in your game world. A Game is a node, too. GameBase is a simple class that allows you to define common properties for your game. It’s not necessary, but quite useful if you decide to use it.

GDScript, originally standing for Generic Domain-Specific Language,  GDScript is a custom scripting language created by Koen Bok for use with the Godot Game Engine. The purpose of GDScript is to allow users an easier method of adding functionality and features to Godot projects, creating games with visually rich software.

GDScript is beginner-friendly so users can learn it very fast. It also provides really nice access to the world’s most popular gaming platform: the Web. While Python is used in many places for different purposes. Unlike Python, GDScript has been designed from day one to be a secret weapon for Unity3D developers.

GDScript is an open-source solution that helps you build 2D and 3D games. It is easy to use, provides a powerful engine to have your game playable on any device, and has constant upgrades. It comes with many functions, very similar to other programming languages so learning GDScript should be fairly quick.

Godot also supports other game development tools like Physics Editor, Visual Scripting (a very useful feature especially if you love developing games by writing codes), Scene Builder, Asset Manager (you can import assets within seconds), Animation Player (extends your animations) which can save you time.

It supports core features of the language while having access to the vast and powerful tool-set provided by the editor. GDscript is not limited to any particular domain, be it visual or non-visual. Its primary goal is to allow domain-specific embedded languages for the creation of games, tools, and other applications.

Is Godot better than Unity?

They both have their own engines which come with programming integrations. for example, character controllers, example player sprites, rich shading languages, particle systems integration, and an endless amount of other features. Community is helpful and friendly for Unity, the documentation is weak at best for Godot.

Godot is a great engine. The guys behind Unity should be worried as there are many similarities between Godot and Unity. Godot really lacks at the moment a fleshed-out Asset store. This is something that Unity has been focusing on and a strong marketing team for its 3d pipeline to other people who aren’t programmers.

Both are very advanced game engines, but Unity has some great assets already provided for you while Godot is more of a blank slate. This makes Unity more beginner-friendly with so many assets readily available but Godot is still easy to get into. It really is just a matter of preference. Perhaps you should try both and see which one you like more?