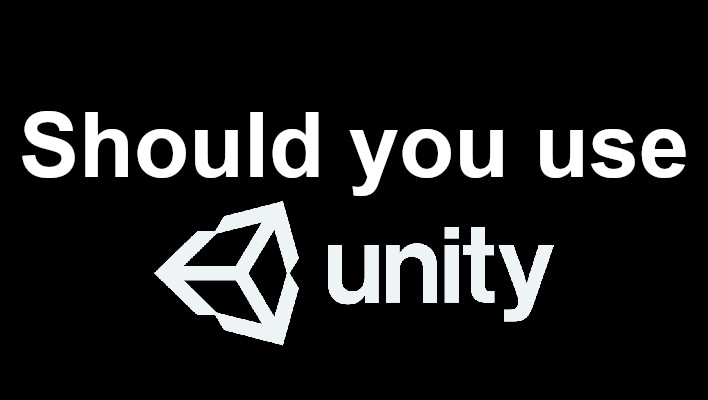 Unity is a great game engine for getting started with game development and is easy to use. It handles most of the complexity involved in 3D game programming so you can spend more time learning how to create great games. It’s free of cost. A lot of games you can find on Steam are made with Unity.

Unity is a cross-platform solution, which means you can make games for Windows, macOS, iOS, Android, Xbox, Playstation. It has its own editor, the ability to import assets from other apps (from your desktop or the internet), and it handles all the complexities of 3D. Unity is the most popular game engine for indie developers. The community and resources surrounding Unity are second to none and will facilitate your learning journey like no other.

Why should you use Unity?

If you plan on releasing something as a standalone product it’s well worth using Unity as your engine. If you are new to game development, it is a very good engine to start learning on. Unity It’s the best way to learn to make 3D games because it takes care of all the hard stuff behind the scenes. Unity has a huge library of free assets available for download, and there are a ton of tutorials online.

The Unity game engine is a fantastic in-game and in-editor solution for displaying and playing your 3D games in an intuitive and accessible way. One of its best features is, hands down, the editor. This makes it perfect for developers who are not very experienced with programming languages who would otherwise be intimidated by using another platform.

The Unity community is very active and there are a ton of resources available to those who wish to learn. There are many tutorials and videos online which you can watch to get started with your first games. In addition, there are several active forums where you can chat with other Unity users as well as the Unity team itself. The community also organizes meetups and conferences all over the world.\

How does Unity work?

Unity is divided into three main sections: Editor, Play mode, and the Scene view. which contains everything in the game. Each of these major sections will be discussed below with some examples to help you understand them better. The Unity editor is where you’ll spend the majority of your time.

You write code in C#, JavaScript. The Editor is where you’ll create your projects or continue working on an existing project. It also includes a Component menu that holds all of the components that can be applied to game objects during gameplay. Unity interface to create all of your game worlds including characters, sprites, objects, images, audio files, sounds effects, materials, lights, cameras, and more. Simply put, everything that will make up your game will be built within this space.

The Play button runs the game in Play Mode which enables playing with physics, scripts, etc. This is where you model 3D objects, design levels, integrate music, build GUIs for your players, and much more. Finally, there is the Game View. This is where you see the actual game as a player would see it. Scene View allows you to easily drag and drop objects into the Scene view for manipulation during gameplay.

The Unity Asset Store is a marketplace that contains forums, posts, helpful users, tutorials, and a large collection of assets. These assets range from free to very expensive depending on their usefulness and/or relation to your project. A few thousand dollars worth of assets can be had for a few dollars if you’re willing to go through the forum posts and get them for free or share some ideas with others. Asset Store allows you to save time spent developing unique game assets that would otherwise be custom crafted for your game project. As a game developer, you can spend your time focused on creating high-quality game content rather than worrying about how the game will look.

Another fantastic part about Unity is the Asset Store, which is pretty much a marketplace for downloadable content. This basically makes your development team infinite. By downloading one package, you have endless options to tweak and change, so you never have to worry about being constrained within your own creativity. It provides millions of assets including 3D character models, 2D animation templates, environments, particle effects, audio tools, and a wide range of scripts and templates for you to use in your games.

When it comes to creating games, performance is very important. There are two key factors in game development when it comes to performance: efficiency and speed. C# is better cause it’s much more universal as there are a bunch of game engines that can be programmed in C# like unity or unreal engine 4.

Unity and C# is a reliable combination for creating games, as it has been used effectively by many platforms. Unity supports C# coding to create a seamless gaming environment. This new C# integration gives greater capabilities to existing games. C# supports Unity and C# is the world’s most popular programming language. For this reason, many developers want to learn about how they can develop games in the Unity3d environment with C#.

C++ is good because it generates faster runtime code and has better control over hardware due to the low-level language. C++ is thought of as a powerful language that’s ideal for game development due to its control over the hardware. C++ offers more than just simple conditional statements and loop controls. It can directly access hardware, create logics with less code, and manage memory allocation – among many other things. you can create new system calls, and provide direct access to your hardware. C++ can also let you access memory below 1MB.

There is no correct answer to this and it comes down to many factors. Either language can be used to achieve what you want and I’m going to share some information above which will hopefully help you make a more informed decision on which language is right for you.